My attraction towards this film I have trumpeted, advertised, as a kind of funny thing that entertains my friends and gives them something quirky to identify with my strange character. Or so I tell myself. But in fact, both the opening credits and images and the closing line ("I wanted it to be you. I wanted it to be you so bad") thrill me.

Like the previous film by Nora Ephron also starring Tom Hanks and Meg Ryan, Sleepless in Seattle (1994), You've Got Mail begins with now incredibly primitive animation. We see Cartesian constructions, i.e. grid spatialization, of planets passing through the image, until one approaches and grows such that its surface becomes a straight line, on which the outlines of the island of Manhattan form. The outlines of buildings in term appear within the lines of the island and 3-dimensional objects then grow out of those outlines. Everything slowly acquires increasing detail. The frame moves down a street and then stops in front of a building. The CGI runner is slowly replaced by "real" humans and a "real" building. The shot jumps to the interior of the apartment of Kathleen Kelly (Meg Ryan).

In the past I have been known to say that three problems concern the film, of which the one concerns the state of capital. Namely, the conflict between the fam 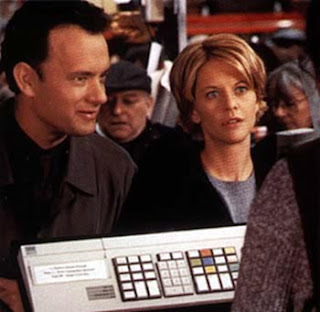 ily-owned small business, The Shop Around the Corner, owned by Kathleen Kelly, and Fox Books, of which Joe Fox (Tom Hanks), the surging mega-bookstore, yet also a family-owned business. There is a famous scene, from the beginning of the film, where Joe Fox is taking two children, to which he is related, haphazardly to the bookstore that Kelly owns. An exchange takes place between Fox and one of Kelly's employees, who is showing off a rare book. Fox, the purveyor of cheap books, asks acerbically if the book "costs" so much because of its special illustration, to which the employee responds that no, this is why it is "worth" so much. Value and value. Would that they were the same?

At the Shop Around the Corner, one may purchase books, but there one is not merely purchasing a book, as Kelly explains. Rather, Kelly sees herself as part of a tradition of booksellers (her mother previously owned the store) that also sell the experience of reading that is formative for a young person, which opens the them to the identity they will one day assume. By contrast, Fox books merely passes on a soulless book that is, presumably, denuded of all spiritual meaning, all identity-generating power.

In another famous scene, Kelly and Fox, who apparently live in the same neighborhood and therefore frequent the same grocery stores, etc., find themselves in the same grocery store and Kelly inadvertently ends up in the cash checkout line, but does not have enough cash and needs to use her credit card. This invokes the ire of others in the line. Fox intercedes when the moment appears most volatile, greases the wheels of capital so that the clerk will accept her creditcard.

The creditcard versus cash; the computer versus the typewriter; the meaningful experience of reading versus the soulless consumption of words; business exchanges versus personal exchanges; ... man and woman (the secret cipher); big business versus family business. Of course, the consequences of this encounter are real, as Fox's assistant, played by Dave Chapelle, notes when he asks Fox if he feels bad about sending Kelly's "ass back to the projects ..." Chapelle, the only person of color in the film.

Don't tell me this is a silly film. Deconstruction notwithstanding, I think you see where this is going.
Posted by Not Chet at 8:33 PM

You know, last night I almost called you to say "Hey Chet! Guess what?! "Sleepless in Seattle" is on TV!!!"

Then, I realized that it wasn't that shitty Meg Ryan movie that you had written about on your blog, but the other one.

Ah well. Just wanted to let you know that I was thinking of you. Sort of.

I like this new blog format. Nice colors, too.

So how about another post? I miss reading your stuff.

My Favorite Posts (not in any particular order)